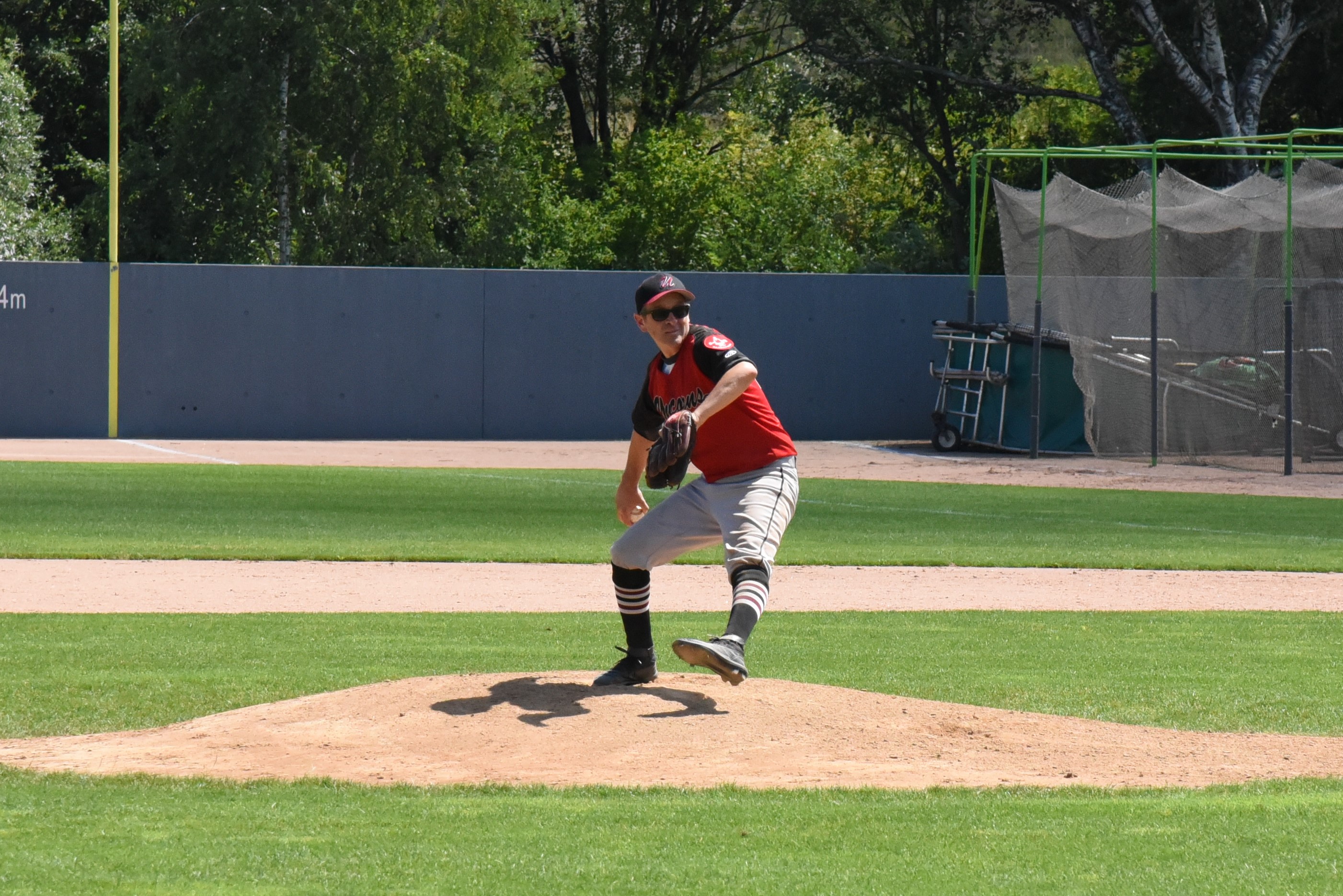 Two weeks after qualifying for the playoffs thanks to losses by the Lausanne Indians, the Unicorns’ NLB team was back in action. On Sunday, the Unicorns travelled to Zurich to face a very strong Zurich Barracudas team. The Barracudas finished the regular season with the best record in the league and had a very deep bench (17 players were available for the game). That contrasted with the Unicorns who were missing 7 players on Sunday including two starters Franklin Chavez and Marvin Mueller. To make things matters even more difficult, the Unicorns lost two more starters to injury at the beginning of the first game when Andreas Gamma suffered a twisted ankle and Benny Raeber sprained his wrist on a diving play at second base. Still the Unicorns battled.

The Unicorns took a 1-0 lead in the first inning on back to back doubles by Bilmanio Castillo and Reinaldo Reyes. Kieran Brot started for the Unicorns after a strong season in which he had 3 wins and 40 strike outs in only 30 innings pitched. Unfortunately, Kieran struggled with command early in the game and the defense behind him also struggled with multiple errors. The Barracudas took advantage and took a large lead. Bilmanio, Reinaldo, and Steven Murphey had two hits each, but the Unicorns lost the first game.

The second game had a similar quick start, Bilmanio led off the game with a hit by pitch, stole second and moved to third on an error. He scored on a sacrifice fly by Reinaldo Reyes to give the Unicorns a 1-0 lead. Michael Bini started game two for the Unicorns and despite a bumpy first inning settled in and pitched well. The Unicorns scored another run in 4th inning on a single by Rafa Pineda Pineda and a sacrifice fly by Ismael Martinez. On the mound for the Barracudas was their ace pitcher, who averaged 1.5 strike outs per inning during the regular season. The Unicorns didn’t strike out often, but had a difficult time making solid contact and the Barracudas defense was excellent. The Unicorns could not come back from the early deficit and also dropped game two, which eliminated the Unicorns from the playoffs.

Coach Steven Murphey reflected on the season for the Unicorns “Of course we wish the season had ended better, but there were a lot of positives to take away. The Unicorns doubled their win total from last season. The team also had a lot of new players that made significant contributions to the club. The Unicorns had 16 new players between the 1 Liga and NLB teams. The team will also likely have the NLB league MVP this season in Franklin Chavez, who set team and league records in several offensive categories. There is a lot to look forward to next season.”

The Unicorns will be holding their annual alumni game in October and then are taking a short break before winter practice resumes in December. The new season will start next year in April.