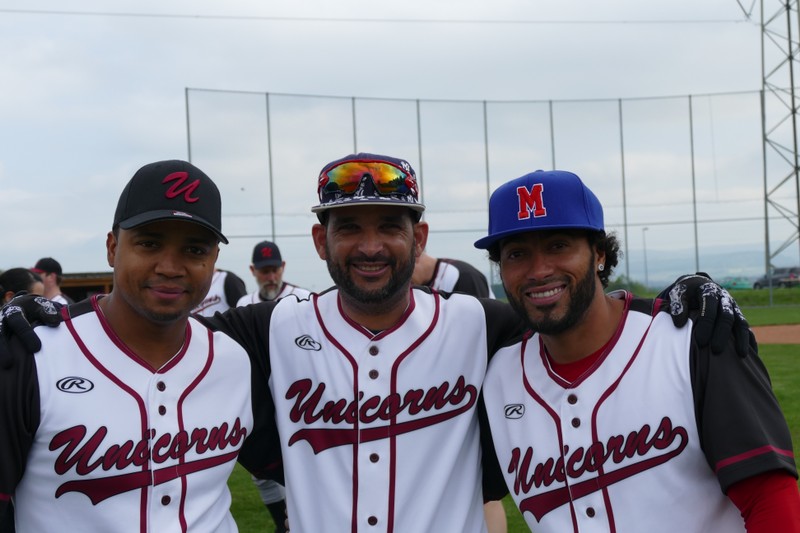 This weekend the Unicorn Softball team finally got to go out and play some ball. After several cancelled tournaments due to COVID, we were all excited to get out and PLAY BALL!

Even the forecasted rain would not stop us.  The first game found us a bit rusty and against a tough opponent in the Toros.  Both teams played well in the rain but the Toros’ bats were hot and ended up taking the first game of the tournament.

As the saying goes, when you fall off the horse the best thing to do is get right back on and keeping true to the saying, our second game of day was played immediately after our first. Both teams, the Frogs and the Unicorns came out strong, quickly maxing out the homeruns on both sides. Unfortunately, in what ended up as a back and forth slugfest, The Unicorns fell to 0-2 on the day.

After a nice break which saw the rain stop and the sun come out, the Unicorn’s third game of the day came against the hosting team, the Basel Beasts. Now everyone knows that Unicorns gain magical energy from the sun and after a rough soggy start to the day, we blasted past the Beasts to take our first win of the day thanks to an impressive explosive outburst of offensive from Castillo, Chimba, and Reyes to name a few.

In our final match up the day we faced the Toros for a rematch. With redemption on our minds after a soggy defeat earlier in the day, we started off strong both offensively and defensively while being evenly matched with the heavy hitting Toros. As the home team, the Unicorns entered the bottom of the final inning tied 8-8. With runner on 2nd and 3rd and 1 out, the Toros intentionally walked Reyes to load the bases and bring up Randy with the bases loaded. A seeing eye hit up the middle scored a run and put the Unicorn’s up for good.  The Unicorns successfully revenge their loss earlier in the day and sparkle on to a 2-2 record on the day.

It was a great day of Softball and a big thank you to the Basel Beasts for putting on the event.