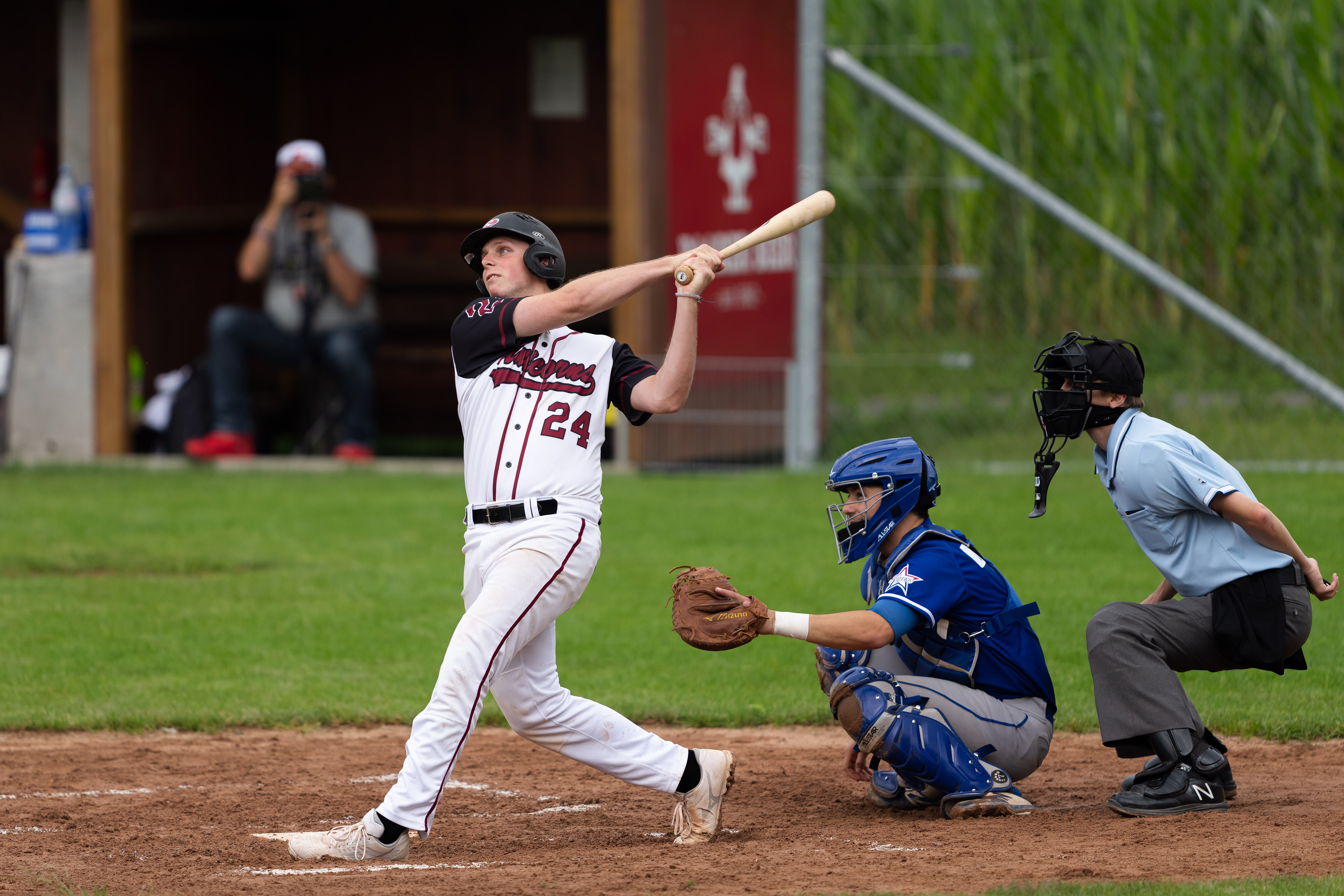 The Unicorns’ NLA team is starting to heat up. After a slow start to the season and several rain outs, the Unicorns notched their first two wins of the season against the Bern Cardinals and looked to continue that momentum against the undefeated league champion Therwil Flyers. The two teams met at Rony field in Hünenberg on Sunday July 25th and from the beginning the Unicorns showed they could compete. Stefan Haltmeier pitched a scoreless first inning and in the bottom of the first the offense produced. Rob Sedin left the game off with a hard single. Ryne Byrne walked and then Sam Brinster cleared the bases with a long home run to center field. The Flyers scored three in the bottom of the 2nd with help from some misplayed fly balls on a windy day, but the Unicorns quickly retook the lead in the 3rd inning with back to back homers from Ryan and Tanner Donnels. A few walks and a bloop double in the 5th allowed the Flyers to take a 2 run lead. With the rain starting to come down that could have resulted in a rain shorted loss. But the  Unicorns wouldn’t allow it. In the bottom of the 5th, Sam doubled down the left field line and, with two outs, Reinaldo Reyes and Bilmanio Castillo walked to load the bases. Steven Murphey was up next and fell behind in the count 0-2,  but he didn’t give up and dunked an opposite field single scoring Sam and Reyes.

At that point the thunderstorm ended play for the day. The game was resumed the following Saturday, August 31st,  picking up in the 6th inning with the score tied. Both teams traded runs on errors, but in the bottom of the 7th, Reyes singled and stole second. With two outs Marvin Mueller stepped up with a single to give the Unicorns the lead. Ryan Bryne, the Unicorns’ shut down closer, took over in the 8th and quickly got two outs. The Flyers showed why they are the defending league champs and put together a run on a double and a single. The stage was set for some drama to finish out the game. It was Ryan, league leader in batting average, that started the rally. He doubled to lead off the 8th. Julio Rijo followed with a clutch game winning hit. All that was left to do was shut down the Flyers in the bottom of the ninth. Ryan left no doubt, striking out the side and securing a huge win for the Hünenbergers.

In the second game of the day, the Therwil Flyers import pitchers shut down the Unicorns bats for most of the game.  The Unicorns only managed four hits in the game and the Flyers won the game 7-0. The bright spot in the game was the Unicorns’ pitching. Dawson Dullnig and Sam Brinster pitched well enough to give the Unicorns a chance. Together they only gave up 4 earned runs over 7 innings. Aidan Mitchell, who made his NLA pitching debut, pitched 2 innings without surrendering an earned run while striking out 3.

The Unicorns host the Wil Pirates on Sunday August 8th in Hünenberg as they battle for a position in the playoffs.