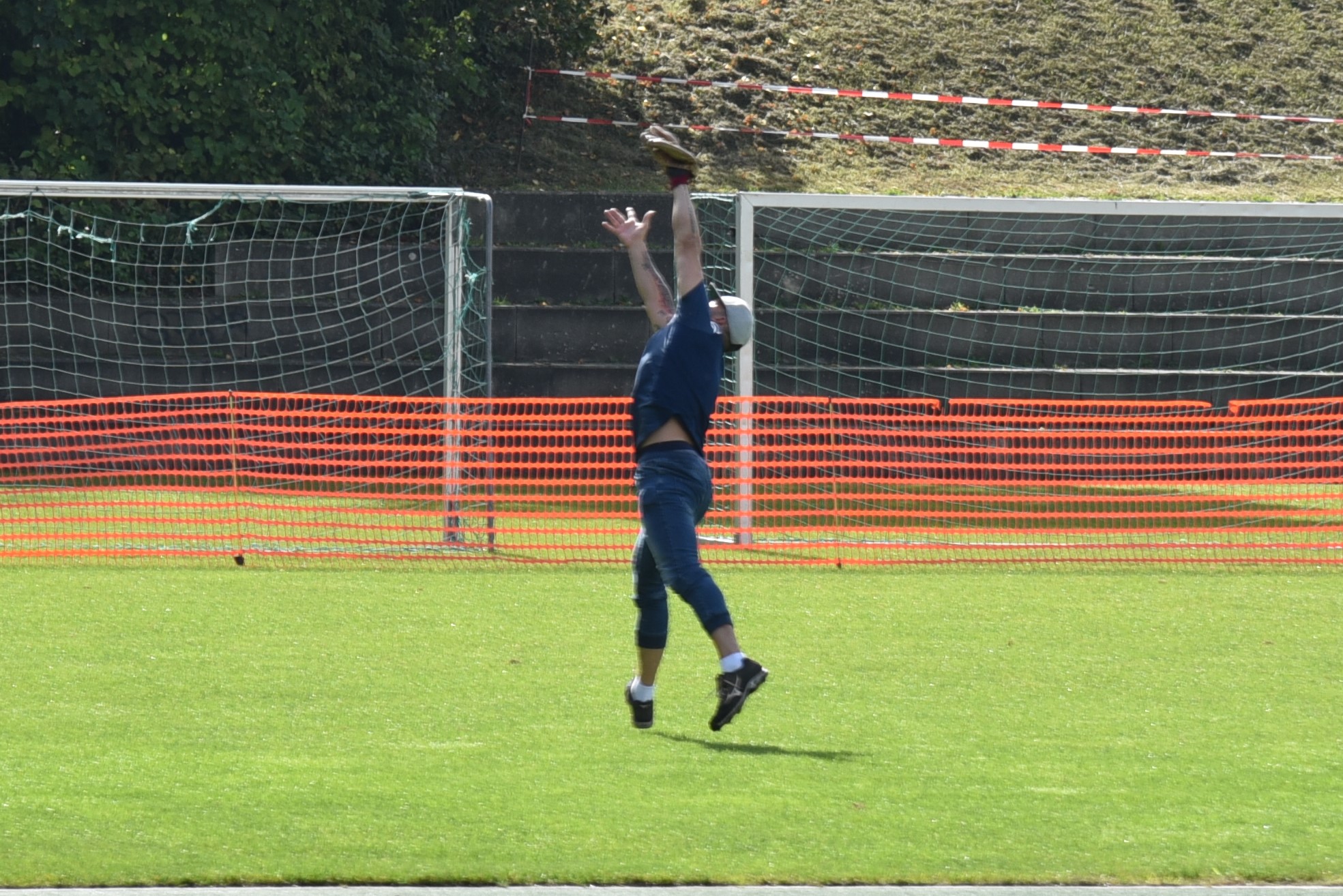 The originally planned Old Star Game between the current Unicorns’ Team and the Unicorns Old Stars (alumni) on September 18 unfortunately had to be postponed due to rain. The players were rewarded on October 3rd with a beautiful sunny day. Autumn has arrived at the Rony and the dew on the grass was felt by everyone’s feet during the warm-up.

After the field was ready, all players warmed up a bit as a preventive measure according to their age and tested how far they could still throw without pain. The lineups were announced, everyone found a position, and the game began. Unfortunately, the catcher’s position could not be filled by the Old Stars this year. Gold Glove Catcher Razavi could not stand behind home plate due to injury and unfortunately catchers Seiler, Hegglin, and Hartmann were not available. However, Old Stars could count on the support of the Unicorns. Marco Fossa caught for both sides for the first 4 innings before Marvin Mueller arrived and stepped in to catch.

The tension rose and punctually at 11 o’clock it was time for the call “Play Ball” by the completely impartial Umpire Razavi. Starting for the current squad, Shaen Bernhardt stood on the mound. He faced off against veteran “JJ” Jimenez of the Old Stars batting leadoff. In the first half inning, the Old Stars scored 2 runs and quickly showed that they can still play. The starting pitcher for the Old Stars was Martin Bosshard. He started the game with a strike out.

The game was up and down and very exciting the whole time. No team was able to pull away.  There were great hits and the spectators had the pleasure to see some spectacular plays on defense. The Rony-Field catch of the day must be emphasized. Darko Schleiss, playing in leftfield, made a spectacular over the shoulder catch in the 4th inning. Actually, the ball had already been hit over Schleiss, however, he was able to recover the ball in full stretch while moving backwards.

During the game there was a pitching change on both sides, Michael Bini relieved Shaen in the 5th inning and Daniel Keller took over for the Old Stars in the 6th. On both sides the level of pitching and defense remained high.

In the bottom 6th inning, the current Unicorns took a one run lead, 5-4, on a double by Julio Rijo and an RBI hit by Raphi Jung. But the Old Stars were not finished yet. The Old Stars battled back with help from a few errors on defense and couple key hits. The Old Stars not only tied it up in the top 7th, they even went into the middle of the 7th inning with a 3 run lead. The Old Stars then turned the game over to their top lefty pitcher Yannick Brot. The Unicorns managed to add 1 run to their account in the bottom 7th before the Old Stars managed to get three outs. In the end the Old Stars won with the final score of 8:6, which is the first win against the active Unicorns in many years. After the game, of course, the socializing could not be neglected. There was a lot of discussion about game situations, wrong decisions of the umpires, and other tactical finesses. We are curious about the outcome of the event in 2022.