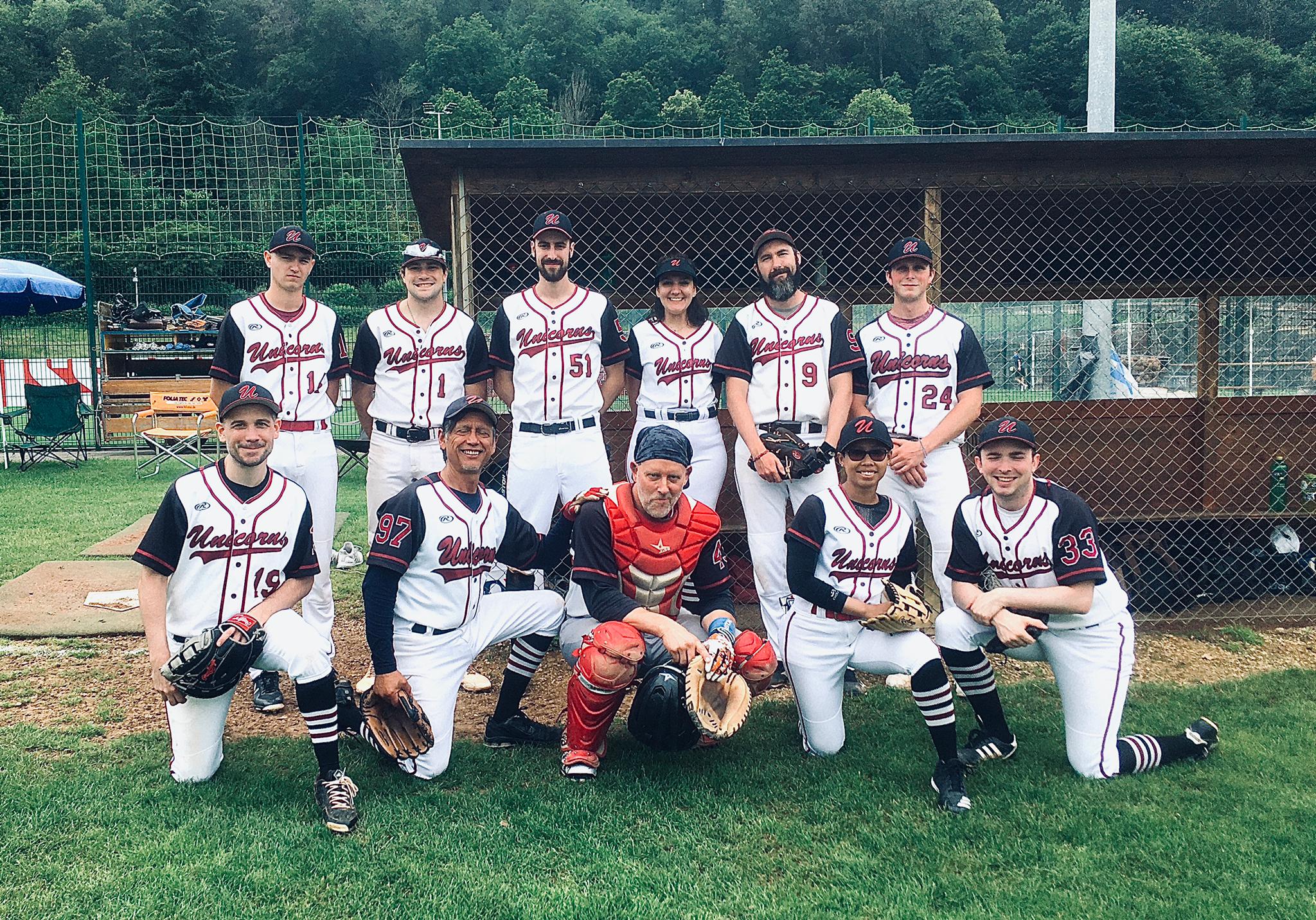 It was 4th July; which is known as Independence Day in the United States. For the Unicorns 1 Liga team, it meant their 3rd and 4th games since the start of the season. The Unicorns delivered two wins in their first two games, which made them confident and ready for the match-ups. The Unicorns travelled to Sissach Tannenbrunnen to face two teams; the Zurich Barracudas and Sissach Frogs.

First up, the Unicorns against the Barracudas. Pitching for the Unicorns was an old star; John Jimenez “JJ” who returned to the mound for the first time since 2011. Aidan Mitchell, also returned to the Unicorns after moving to the US in 2019, was JJ’s battery mate at catcher. The 1st till the 3rd innings were intense as the Unicorns tried hard to defend and JJ kept throwing strikes to give the team a chance. The Barracudas led 6-0. In the 4th Inning, the Unicorns started their comeback. JJ single down the left-field line, scoring Raphi Jung and Simon Weisskopf. Randy Munro moved to 3rd and JJ to 2nd on the throw. Atiqah Kukan walked on four pitches to load the bases. Benny Räber delivered with a fielders’ choice to third scoring Randy. That brought the Unicorns back within striking distance at 3-6. Lukas Fabel followed that with another single and bases were loaded again. Dawson Dullnig stepped to the plate and smashed a drive off the pitcher. Unfortunately, the pitcher recovered in time to make the out at first ending the threat.  During the last 2 innings, the Unicorns tried to stay focused and gave all their best but the Barracudas finished the game strong and won by the score of 3 to 8.

In the second game, it was Sissach Frogs turn against the Unicorns and the weather started to change. The Unicorns were determined to get their win. The Unicorns regrouped and turned to Aidan Mitchell as the pitcher and Dawson Dullnig as the catcher. With a little luck, the Unicorns scored 1 run on only 1 hit in the first due walks by Benny Räber and Lukas Fabel. During the game, the Unicorns maintained their confidence and high intensity. In the second inning Randy walked and stole 2nd. Atiqah followed Randy with another walk and was picked off at first. However, during the run-down Randy came around to score giving the Unicorns a 2-0 lead. The Unicorns did not stop. In the 4th inning Atiqah singled through the right side, driving in Raphi to put the Unicorns up by 3.

As it started to rain heavily, the Unicorn players continue to play the last two innings. The Unicorns had a great rhythm on both offensive and defense. As the last inning was about to end Sam Brinster took the stage. And yet again, it was a Home Run! The Unicorns wrapped up their game with a great victory! The game ended with a 6-0 against the Sissach Frogs.

Congratulation to both JJ and Aidan for their outstanding pitching debuts against the Barracudas and Frogs. JJ finished with a complete game and 6 strike outs. Although Aidan Mitchell had a slight injury, he had an outstanding performance throwing a complete game on 95 pitches which include striking out 15 of the 23 batters he faced. Great job guys!

The next game will be on July 18th against Zurich Barracudas and Bern Cardinals at Heerenschürli. Check out www.spielplan.ch for the schedule and more! Come out and support your 1st league Unicorns!