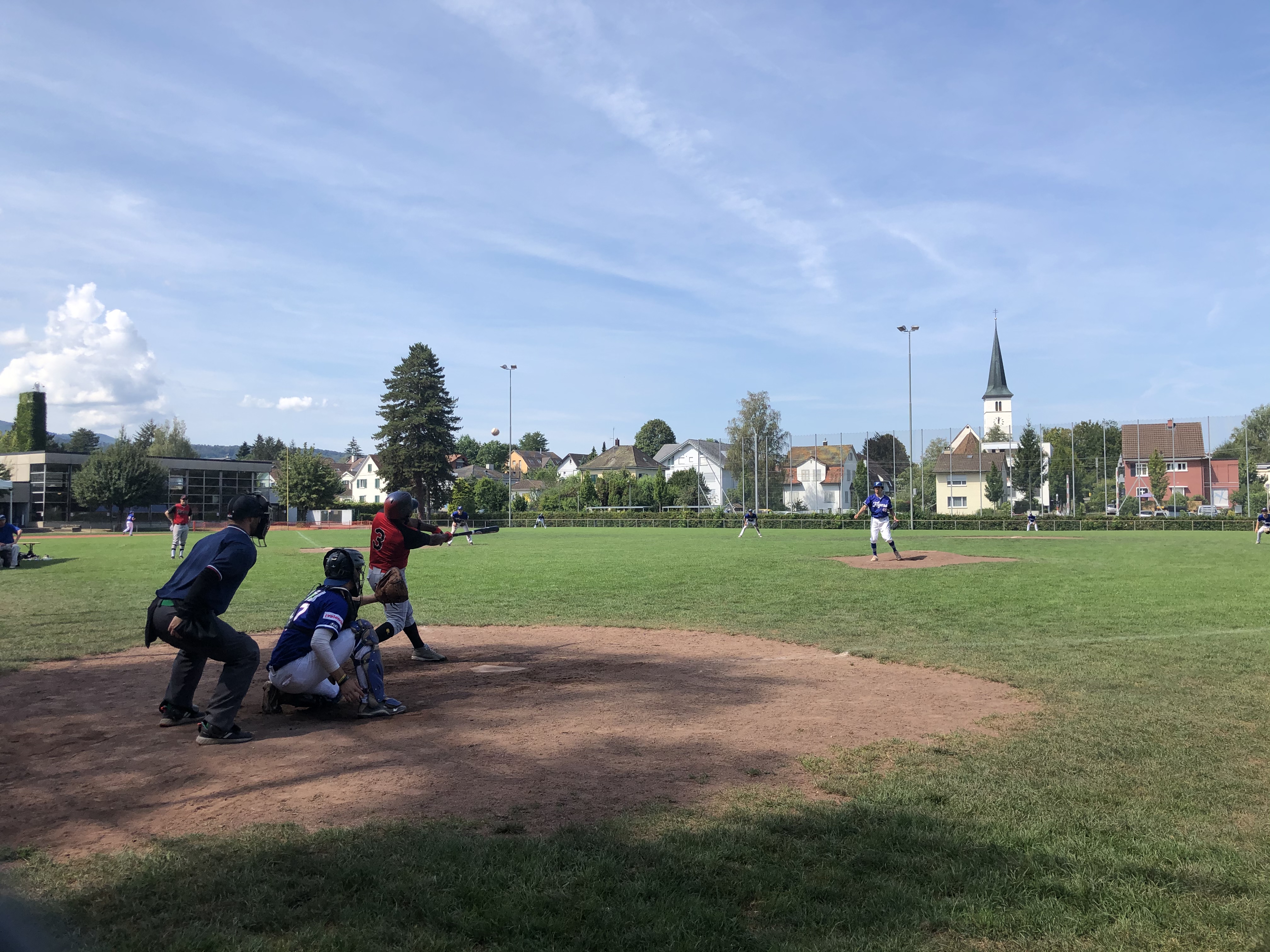 The Hünenberg Unicorns’ NLB team traveled to Therwil on Sunday needing just one win in order to secure a spot in the playoffs. Unfortunately, there are no easy games in NLB and the Flyers came ready to play. The Flyers jumped out to a 4-0 lead after the first 3 innings. In the 4th, the Unicorns offense finally got started. Reinaldo Reyes walked, stole second and third base and then scored on an error. Rafa Pineda Pineda followed with a hit by pitch and scored on an RBI single by Michael Bini. In the 5th, in Franklin Chavez hit a towering home run, to bring the score to 4-3. But in the bottom of 5th inning, the defense made several errors and allowed another 3 runs, but the Unicorns kept working their way back. In the 6th inning, Bilmanio Castillo hit a double and then scored on an RBI by Raphi Jung. And in the 7th inning, the Unicorns felt the momentum start to shift. Franklin hit a double. Then Steven Murphey walked. Andreas Gamma hit a fielder’s choice to second base which scored Franklin. Andreas stole second base and scored on a hit by Reinaldo Reyes. Sadly, the Unicorns fell one run short. Kieran Brot pitched a masterful game giving up only 4 earned runs in 6 innings while striking out 9. The Flyers won the first game 7-6.

In the second game the offense got rolling early. The Unicorns scored 5 runs on 5 hits in the first inning. Steven, Andreas, and Shaen Bernhardt provided RBI singles. In the second inning, the offense kept their foot on the gas. Reinaldo was hit by a pitch, Franklin doubled, and Rafa walked to load the bases. Bilmanio drove in Reinaldo with a fielder’s choice to second and Franklin scored when Bilmanio stole second. Unfortunately, in the bottom of the second inning, the Unicorns let the Flyers back in the game with several walks and a few errors. The Flyers tied the game 7-7.  From that point onward, the game suddenly turned into a pitching duel. Michael Bini started the game for the Unicorns and set the Flyers down quickly in the 3rd inning, but the Flyers managed a couple of hits in the 4th inning to take a 2 run lead. On the offensive side, the Unicorns managed to get runners on base, but couldn’t convert them to runs. Steven doubled in the 5th inning, but was left at second. Kieran reached on an error in the 6th, then stole 2nd and 3rd base. But he too was left stranded at third base. In the top of the 7th with the Unicorns down by 2, they mounted their final rally. With one out Rafa singled and stole second. Steven then singled him in and also stole second. Then Andreas hit a hard ball to third and appeared to beat the throw to first. The umpire initially called him safe. Unfortunately, a lot of complaining by the Flyers convinced the umpires to change their call, and that ended the game. The Flyers won the second game 9-8.

The Unicorns must now wait until a match between Lausanne and Luzern next week to see if they will qualify for the playoffs. The playoffs would start on Aug 30th.