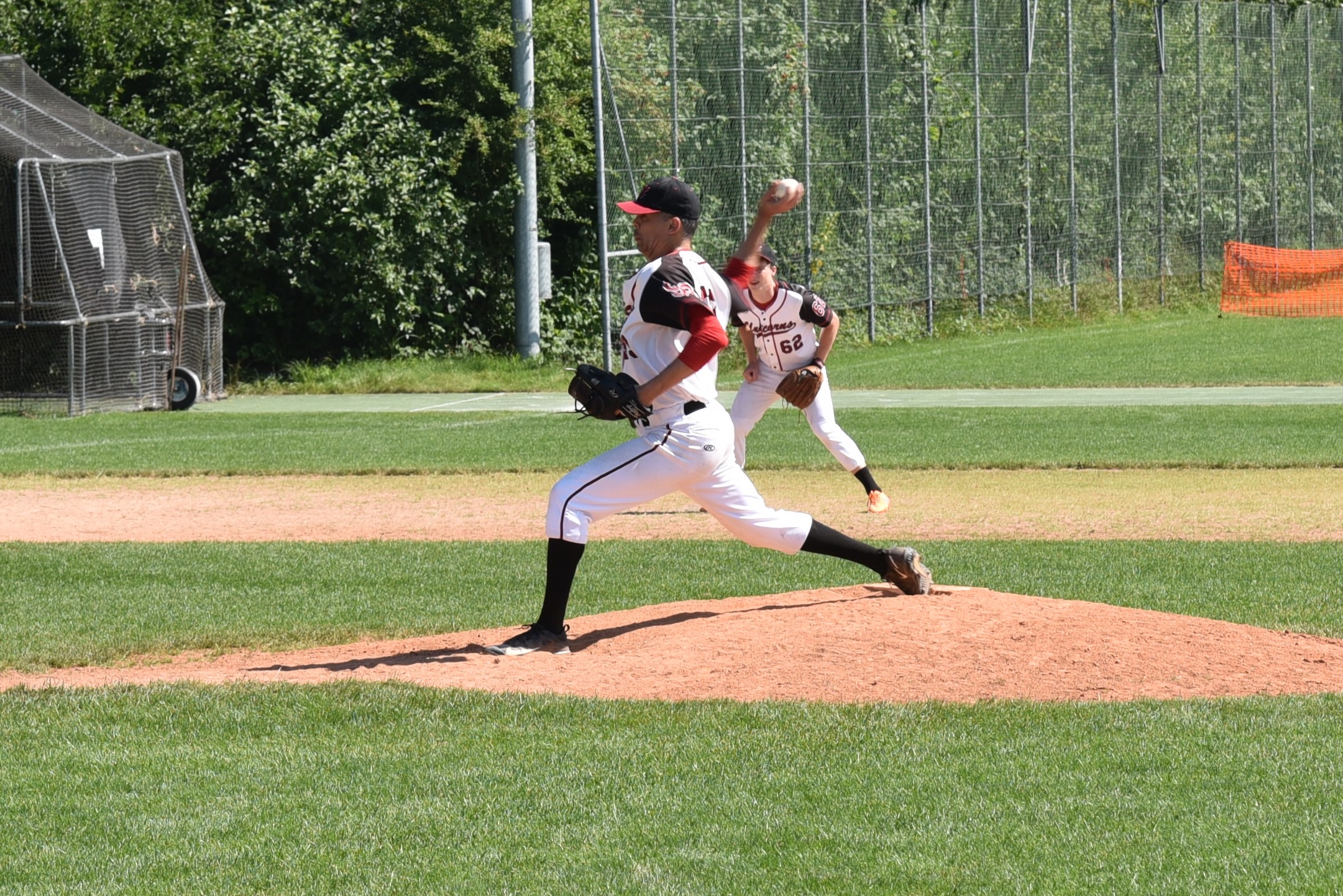 The 1 Liga team took the field on Sunday playing for their chance to make the playoffs. The Unicorns faced off against the 1st place Bern Cardinals and 2nd place Dulliken Truckstars. Because of the summer holidays it was not the usual team. Several Unicorns alumni (Martin “Bossi” Bosshard, Giw Razavi, Kenny Newman, and John “JJ” Jimenez) came back to play after several years off and a new player (Marco Fossa) bolstered the roster. It was a hot and humid summer’s day, but the team played hard through the last pitch.

In the first game against the Truck Stars, Bossi took the mound. Despite not pitching in the last 5 years, Bossi did not show any rust. He started the game off strongly by striking out the first batter. Bossi kept the game close in the first three innings, but sadly several defensive errors in the 4th inning allowed the Truck Star to build a large lead. Bossi pitched 4 innings, striking out 4 and only walking 3. In the 5th inning, Kenny Newman pitched in his first game in 1 Liga. He also hadn’t pitched for the Unicorns since his days as a Cadet. Despite walking several batters, the defense bailed him out when Giw Razavi threw out a runner trying to steal third. And then, Aiden Newman made a great catch in centerfield and turned it into a double play with a perfect throw to Niko Yfantis who caught a truck star runner off second base. On the other side, the Truck Stars’ starter had been throwing extremely well. The Unicorns had only managed one hit by speedy Stefan Jakus in the 4th inning. However, in the bottom of the 5th, the team began to wear down the Truck Stars’ started. The team drew 12 walks in the game, including two walks from Giw, Niko, and JJ. Those walks paid off in the 5th when the team score three runs; capped off by an RBI walk by Piraveen Puvanendran. Unfortunately, the rally fell short and the Truck Stars won 9-3.

To make the playoffs, the Unicorns would need some help. Since the Bern Cardinals were undefeated and the Unicorns had 2 losses, the Unicorns needed to root for the Truck Stars to beat them in the second game. That’s exactly what happened and that set the stage for a very exciting game three. The winner of the Bern Cardinals vs. Hünenberg Unicorns would qualify for the playoffs. The Unicorns were the visitors in this game and got a great start. The Unicorns scored three runs in the first inning off of Cardinals errors. The Cardinals were up for the challenge and returned 3 runs of their own in the bottom of the first. In the top of the third inning, the Unicorns’ offense caught fire Aiden and JJ walked and Kenny hit a double off the left field fence, to score Aiden. JJ scored on a wild pitch and then Bossi hit a sharp single to score Kenny. But the Cardinals answered in the bottom of the third with three more runs to tie the game. In the fourth inning, Giw started things off by blasting a ground rule double. He moved to third on Stefan’s single and scored moments later on a wild pitch. Shaen Bernhardt started the game for the Unicorns and pitched a very strong game. He struck out 8 Cardinals in 5 innings and gave the Unicorns the chance to get the win. Sadly it was again a few defensive miscues and a single against a drawn-in infield in the bottom of the 5th that allowed the Cardinals to capture the lead before time ran out. The Cardinals won the game 10-7.

The 1Liga team has a lot to build on this season. The team will keep practicing and improving over the next two months. The 1 Liga team will be playing next in the Old Star game on Oct 3rd.