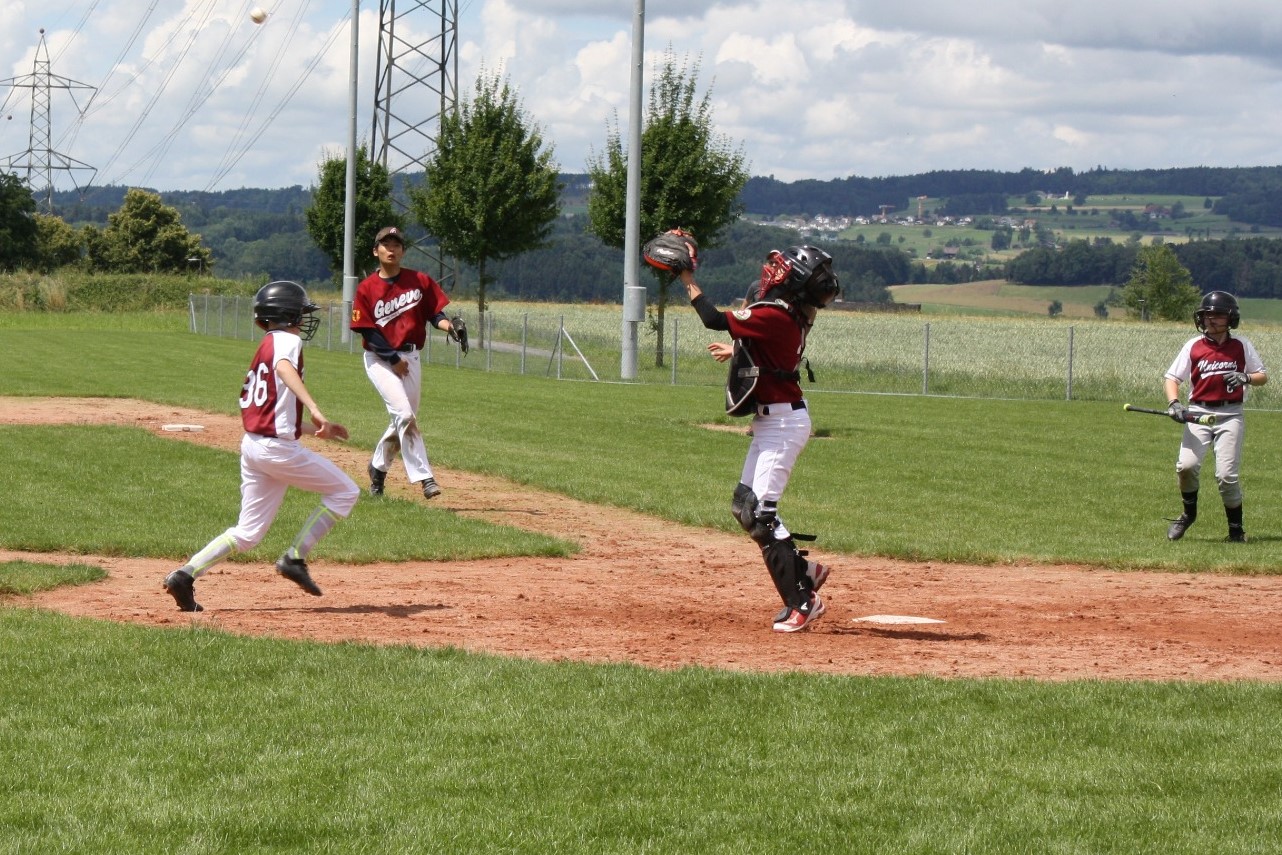 Baseball is back! After finishing in second place at the 7th Dreitannen Tournament in Olten in early March, the Hünenberg Unicorns were looking forward to starting the regular season in April before the lockdown went into effect.  The Swiss Baseball and Softball Federation (SBSF) approved plans to start a shortened U15 (Cadets) baseball season in June.  The Unicorns were scheduled to open the 2020 season at home on 14 June against the Bern Cardinals but were rained out, delaying the start of the season for a week.  Consequently, an excited Unicorns Cadets team opened their season at home under blue skies and a festive atmosphere with a double-header against the Geneva Dragons on Saturday, 20 June.  Dragons coach Daniel Deliz was overheard saying just as first pitch was thrown, “The Unicorns have the best baseball field in Switzerland.  It’s great to be here!”

The 2020 Cadets have a talented young roster, including three players who were invited to join the Swiss Baseball Academy following try-outs last September, one of whom is also on the Swiss U15 National Team.  During a break between games, long-time Unicorns season ticket holder Liz Mumenthaler said, “This is the most talented Unicorns youth baseball team I’ve seen since the 2013 Juvies won the Swiss championship.”

The Cadets are a young team, and their youth showed at times against a veteran Geneva Dragons team that won the Swiss U15 National Championship in 2018 and were semi-finalists in last year’s tournament.  Dragon’s ace pitcher Ibraheem Khan started both games for Geneva, striking out eleven batters over five innings.  The Unicorns lost the first game 6-14, with the Dragons capitalizing on an early 5-0 lead in the first inning before the Unicorns found their groove and both teams battled competitively the rest of the way.  The Unicorns had a better start in the second game, going into the third inning trailing 0-2 in what began as defensive battle between two strong pitchers in Jonathan Egger and Ibraheem Kahn before the Dragons ignited for five runs in the third.  The Unicorns responded with two runs in the top of the fourth, but ultimately lost 2-12.

Commenting after the double-header, Cadets coach Jon Fragodt said, “Our kids played well.  We made some early mental mistakes that are fixable, but the team played great defence overall and didn’t make any fielding errors.  Seven of the ten innings we played today were very competitive.  We’re a young team and we’ll continue to get better as we get more confidence in our hitting and pitching.”

The Cadets will break for the summer school holidays in July and resume action on Saturday, 9 August when the Unicorns travel to Bern to make up the rained-out games against the Cardinals. Interested boys and girls are welcome to attend a training session to try baseball.  The Unicorns next training will be on Wednesday, 12 August.